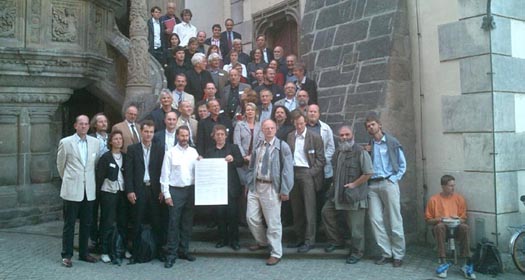 Delegates at the launch of CEU Deutschland with the signed Charter

First day at the town hall of Görlitz (German side)

Opening of the conference. . .

The mayor of Görlitz, Stefan Holthaus, opened the seminar with an introduction on the background of this unique city lying on the German-Polish border, and the problems of its shrinking population.   Today European cities have a great challenge to meet, the end of the industrial age.

Harald Bodenschatz hold the opening speech of CEU-D. He focused on the necessity of the ‘Stadtumbau’, the reconstruction of our cities.   The solution to the problem of urban sprawl is the return to traditional city planning.   But he emphasized that we should not blindly copy our old towns, but do so critically.   He pointed out the importance of seeing town planning and architecture as two separate issues, and emphasized that both traditional and modernist architecture can have its place in a traditional town planning.   To him the style of a building is not essential in a town-planning perspective.   And he pointed out that while many criticize it, New Urbanism has some strong points in its favour:

1. The emergence of New Urbanism has undoubtedly led to a lot of awareness and discussions around town planning.
2. New Urbanism has a practical, and not academic approach.
3. Today the New Urbanism movement has the ability to criticize itself, and thus to improve further.

As examples of successful city reconstruction Bodenschatz mentioned the revival of Chicago and Genova.   Finally he suggested that the CEU-D should have a bridge-building function across the different professions, and thus create a powerful network between planners, architects, sociologists, inhabitants, etc.

Harald Kegler supported Bodenschatz in his statements.   He emphasized that action has to be taken, one has to take consequence from the discussions.   And he pointed out that the CEU-D should not only look at the city and the village, but also integrate the landscape in its approach.   Further he suggested that the CEU-D should also be engaged in the broader social questions, for instance on how to solve the problem of social integration of minorities.

Wolfgang Christ opened part one by pointed out four specific problems that have to be solved by reconstructing our cities:

1. With the rise of supermarkets and the closure of small shops parts of the city are dying.
2. Privatisation of public services might lead to a deterioration of physical and social structures of the city.
3. There are fewer and fewer children, and our surroundings are not very child friendly.
4. Social integration.   In the future 20 — 50% of Germans will be the descendants of immigrants.

Lutz Penske of the city authorities of Görlitz gave the audience a detailed picture of the historic development of and the recent challenges faced by Görlitz.   Today 25% of the housing is empty; in the historic city center it is as much as 40%.

Hildebrand Machleidt from Berlin argued for the urban reconstruction of the historic Berlin.   He pointed out that the historic property sizes help to prevent big speculative projects with possibly disastrous outcome, as smaller scale properties are more easily adopted to change.

Duane Philips, an architect, pointed out that while the traditional European city structures allow for a varied mix of use, many modern developments (e.g. ‘Plattenbauten’) are purely monofunctional and thus have difficulties to adapt to changing circumstances.   He went on to present a project in Eggesin to remodel apartment blocks into other, small-scale housing typologies.   In eastern Germany many apartment blocks are built of demountable concrete elements, which can be reused in various other configurations.   To remodel existing apartment blocks in this way is 30% cheaper and of course much more sustainable than the alternative, to completely demolish the existing blocks and to replace them with new homes.   This idea was developed in a charette together with inhabitants, but unfortunately the authorities have decided against it.   Only in Cottbus it has been tried, five family homes have there been built out of reused concrete elements.

Next on was Karl Friedhelm Fischer, an academic and inhabitant of Unterneustadt in Kassel.   The city plan of this area roughly follows the historic pattern previously in place, but the density has been increased and the architectural style is purely modern.   Fischer highly prized the architectural diversity, the good public spaces and the functional mix of the area.   The critique he had on the development was mainly that some parts of it were too dense.

Harald Kegler presented the charette that was held in Merseburg, another town faced with the challenge of what to do with old abundant apartment blocks.   The basic idea of a charette is to involve potential critics at an early stage, and thus make them partly responsible for the result.

Michael Stojan, town planning officer of Gladbeck, presented his work.   He recognized that modernism has lead to a loss of identity, and thus sees New Urbanism as the way to revive the individual identity of cities.   In his work he aims to recreate traditional urban structures.   He presented numerous examples, ranging from the planned replacement of the existing 60’s town hall to the reconstruction of the market place.   He actively takes part in new developments to ensure that they are built in line with New Urbanism principles.   Modernist architecture he only accepts if it is assimilated into the context, generally he prefers a traditional style.   There were several critical questions from the audience on the issue of controlling architectural style, but his efforts to shape good public spaces were widely acclaimed.

Harald Kegler ended the day by emphasizing that one has actively to include the inhabitants, for instance by charettes in the city restructuring process.   He pointed out that the Charter of Stockholm was deliberately held as open as possible as to include people with different opinions, for instance with different preferences on architectural style.   The Charter was meant as a starting point, from which onwards it has to be worked towards the common goal.   The following discussion was mainly about minor translational differences between the English and the German version now presented.   In the end, the audience signed the Charter, and the CEU-D was officially founded.

Second day at the Hotel Pod Orlem in Zgorzelec (Polish side). . .

The second day was marked by a series of lectures and statements on the topic of regions, suburbia, transportation and ecology.   It would be beyond the scope of this document to go into detail of every statement.   But here are some examples:

Frederic Shepperd, a US developer, talked about the possibilities that now arouse for the border region between Poland and Germany, and thus for towns like Görlitz / Zgorzelec.   The background for his statements was his experience with the El Paso border region between Mexico and the US.

Wolfgang Christ, an architect, talked about the problems and possibilities of suburbia.

Karl-Heinz Maschmeier, representing an investor, talked about the relations between architecture and investment.   He sees the quality as very important for new developments, only projects with good architectural and urban qualities are sustainable in the long run.   Many of his projects are thus done in traditional style, both urbanism and architecture.   Further, Maschmeier thinks that the education of architects must be broarder than it currently is: it should among other matters focus more on the economics of projects.   On this he would like to cooperate with the CEU.   And he sees it as problematic that people do not distinguish between architecture and urbanism.   The investor he represents is personally interested in traditional architecture, but he does not want to get involved in discussions about architectural style.   He rather wants to provide good developments with fine urban qualities that will keep their value in the long run.   Finally Maschmeier pointed out that together with the location, the architectural and urban qualities of a project are the most important.

The full programme with names of all other lectures, their topics, and other statements, can be seen on CEU Deutschland’s web site (in German).