Some 60 people from a wide range of backgrounds met in Stockholm in 2003 to sign The Charter of Stockholm as the grounding document of the Council for European Urbanism. The Council was created in Bruges early in 2003 and is a network of members whose mission is dedicated to the well being of present and future generations through the advancement of humane cities, towns, villages and countryside in Europe.

The Council set as its objectives that cities, towns and villages should have mixed uses and social diversity. They should make efficient and sustainable use of buildings, land and other resources. The Charter signers agreed that cities “should be safe and accessible by foot, bicycle, car and public transport. They should have clearly defined boundaries at all stages of development; have streets and spaces formed by an architecture that respects local history, climate, landscape and geography; and have a variety that allows for the evolution of society, function and design”.

In April 2003 a number of interested individuals gathered in Belgium for the first Euro-American New Urban Council.   It was a great success, and by the last day the group concluded that it was time to create a movement dedicated to European urbanism. It was agreed to meet in Stockholm to pursue this aim more formally and finalise a Charter to define the aims of the Council.

During an intense one-day session in Stockholm on November 6th 2003 some sixty participants came together to:

The meeting took place at Järla Sjö, Nacka (below), a new urban neighbourhood built around an old mill located 10 minutes from Stockholm City. Click here for more details about this development.

Model of the Järla Sjö development

The first session comprised panel presentations from Harald Kegler, Robert Adam, Matthew Hardy and Javier Cenicacelaya on the aims of the Council for European Urbanism. This was followed by an open discussion on the proposed Charter and all participants had an opportunity to assist in making final adjustments to the text, which is reproduced below.

Presentations from the developer and project architects of Järla Sjö, Nacka preceded lunch which was followed by a guided walk around the new neighborhood.

All participants then took part in signing the Charter.

The signers with the Charter

Valuable input from Andres Duany, Ellen Greenberg, Robert Gibbs and Robert Adam assisted in the process of both finalising the Charter and considering future actions.

Finally there was a discussion on setting up a structure and secretariat function for the CEU. Members of an Interim Steering Committee were elected and it was agreed that the secretariat would be Oslo based under the stewardship of Audun Engh of Byens Fornyelse, funds permitting.

Members of the Interim Steering Committee elected by the participants for office over the next year are:

Following finalisation of funding, it is intended to set up a secretariat for the CEU in the Oslo office of Byens Fornyelse under the direction of Audun Engh.

The Interim Steering Committee met over for the first time and flagged a draft programme of events to take place over the coming two years. Tentatively these include the following:

It was agreed that the CEU would set up task forces to pursue particular aspects of European urbanism.   An open discussion with members on all aspects of task force themes and structure should begin as soon as possible.

THE CHARTER OF STOCKHOLM

The Charter is available here. Additional supporting text is currently being finalised under the editorial direction of Robert Adam.

THE GENERAL AGREEMENT ON MIXED USE

The Council participants ‘adopted’ the General Agreement on Mixed Use prepared as part of a conference run by the Ax:son Johnson Foundation. 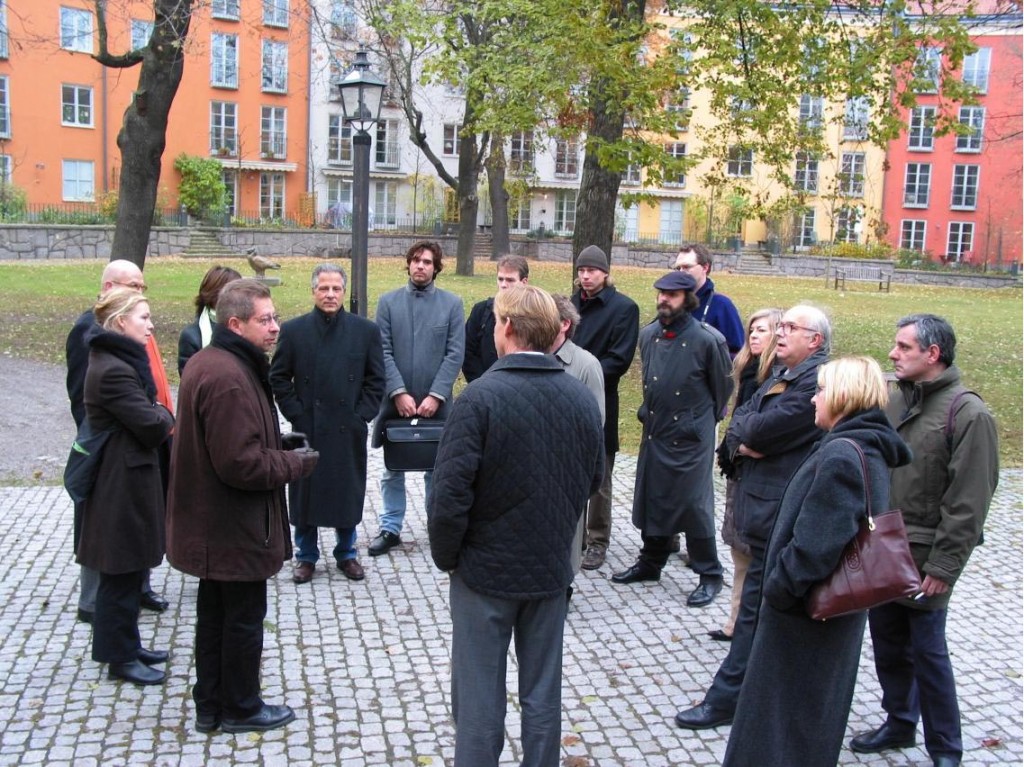 On Friday following the charter launch, a number of participants visited the Sankt Erik site in inner Stockholm. This development is sited on an old hospital site closed in the late 1980s, for which there were high expectations around the proposal to create an extensive housing complex. Some of the original hospital (the workhouse and maintenance buildings) were saved. The remainder of the development comprised a range of housing, mostly in terrace and apartment forms. Some is centred on an urban space in the form of a ‘circus’ containing a local church that was moved to its new position within the circus. The development also addresses the urban edge to the river through a strong wall of housing and an axis or ‘sweep’ flanked by two new residential towers and terminating in a substantial stairway and pond located within the river side park.

Sankt Erik’s character is reinforced by its tower elements, sculpture and interesting apartment typologies, which deal with difficult site constraints (for sun access for example) in an imaginative and highly urban way. Its connection to urban greenery is reinforced by substantial tree planting and landscaping.

As one of the participants in the site visit commented: “I was very much impressed by St Erik’s in Stockholm; simply because excellent urban spaces go hand in hand with a respectful integration to the existing quarter and the existing topography. Our host Aleksander Wolodarski fortunately had the time to guide us around; he sent us a beautifully documented book on Sankt Erik that is very helpful to understand the scheme better. Architecturally I find Sankt Erik very refined through all scales of perception and its use is very ‘urban’ indeed: in each spot you know what space you’re in and urban convention tells you how to behave and who’s property you are on. The loosely placed chapel adds poetry and spiritual reflection to the area”.